Network data can come from various sources: some are downloaded from the internet, others from various software; some from survey or text extraction exports. Other times networks could be created from scratch, or hand-drawn in free space. As network scientists, we’ve recognized how hard it is to import usable data. Various formats and delimiters, applications that have come and gone, make it hard to easily transfer datasets across applications, systems, and users.

Before getting to the difficulty of the network itself, there’s often the trouble of getting the network into the software. We’ve tried to help minimize the burden, by offering a handful of ways to get started. We’ve written converters for a couple of the most common file formats, as well as general spreadsheet import. We’ve also created (yet another) potential file, called a .a2e file, a glorified JSON file, that makes it easy to save, load, and share A2E projects.

Networks found on the internet can be imported into

We’ve offered a variety of ways to get started with our network interface: drawing manually, using starter template data, importing from Excel, or importing from JSON. 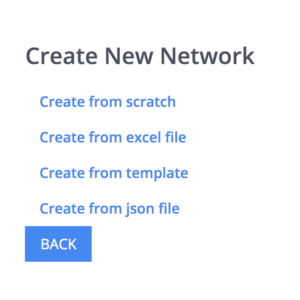 Creating a network from scratch enters the user into manual draw mode. There’s an ability to

A .a2e project file is essentially a JSON blob file. Both the node list, as well as its associated properties; as well as the edge mapping function; as well as a layer of decorators can be

V2: maybe this should be an option for a type of network in the ‘create’ step 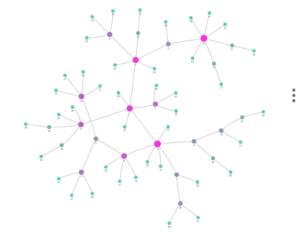 Atoms to Eve is an interactive network science research platform created to discover, explore, and visualize the networks of complex systems. The mission of Atoms to Eve is to empower the next generation of network scientists across physical, biological and social analysis disciplines, as well as provide the public tools to understand the networks in their everyday lives.